Have you taken the AUGI Salary survey yet? If not, make sure you are represented - the survey closes August 19th at midnight, PST, US!
AUGI Survey link
Posted by Steve Bennett at 10:59 AM No comments:

Email ThisBlogThis!Share to TwitterShare to FacebookShare to Pinterest
Labels: AUGI

Keeping track how many licenses the company has in use can be a challenge, especially if you utilize multiple license servers at different locations. When I first started at HMC they had configured a DOS script to query each license server and generate a text file. That's great if you only have one server and only need to identify usage at a specific point in time. Once you get into multiple servers or needing to sample throughout the day, then you will want to look at something like JTB FlexReport. It's a very powerful tool which allows you to sample usage at intervals throughout the day and record the values so you can start to build historical license usage. However, depending on your budget, you may not be able to go for the full version.

I'd like to introduce you to JTB FlexReport LT which is a free, lite version, of their full tool. I'm immediately putting it to use as I can now query every server with the click of one button instead of using multiple scripts for each server. Here's how it works.

Licenses to Report on:
Setting up the servers you want to query is the first step. A simple @servername will do. Replace servername with the name of your specific server. Description is optional, but you can see that I chose to add one for each server (names have been removed to protect the innocent). 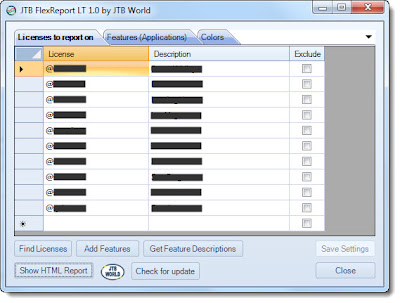 Features:
Adding the correct feature codes is really simple. Clicking item (1) "Add Features" will query the license files and list all possible feature codes that can be reported on. Due to the nature of our license files, I needed to exclude what it found by placing a check mark next to the individual entries for specific releases of products and only reporting on the main feature codes - see item (2). Then for item (3), I gave a brief description of the features I wanted to query. Then click Save Settings button - item (4) - to save your changes. Lastly, click item (5) - Show HTML Report - to display your report. 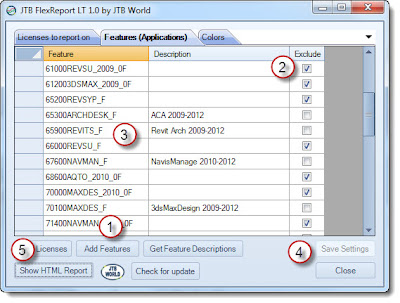 HTML Output sample
Below is a sample of the output generated by the program and quickly gives us feedback on what is getting the most use. Here is a breakdown of the data presented (with names/numbers removed to protect the innocent): 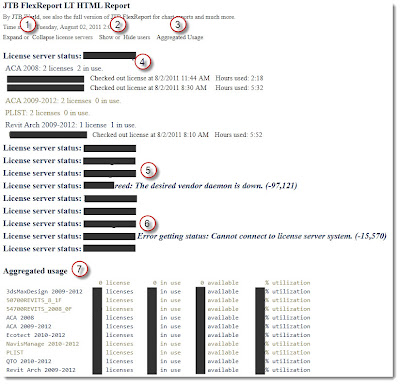 In Summary
JTB FlexReport LT is a very versitle tool in itself and quickly provides you a snapshot of what is going on with your licenses at any given moment. As it's free, I'd highly recommend you take a look at it if you use network licenses. You may even decide in looking at it that you would want to give the full version a try. In that case, I would suggest to contact JTB World to inquire more about the full version and its capabilities that go far above and beyond what the LT version does. Personally, I'm hoping to get the full version sometime early next year.
Posted by Steve Bennett at 12:00 PM 3 comments:

Tired of maintaining a wall library file?
Tired of generating one off wall types for a specific project?
Tired of having to verify if your wall meets structural, STC or fire rating codes?
Tired of users not creating walls that conform to your firm or industry standards?

If you answered yes to one or more of the above questions, then you will find the tool I've been beta testing of extreme interest. The tool is being produced by a metal stud manufacturer, but the implications are huge. ClarkDietrich Building Systems has named the tool ClarkDietrich BIM Wall Creator. They have even taken the effort of posting a YouTube video showing the basic work flow of their tool. 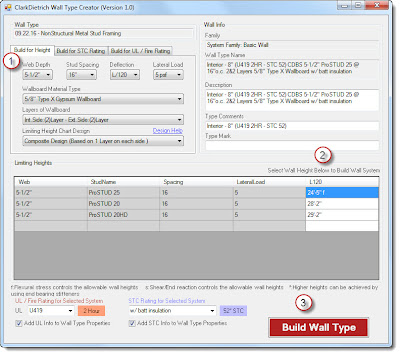 For item (1), this is where you build out the desired parts of your wall assembly. In the image above, we are looking to design a wall assembly by height. By changing the different components in the assembly (Web, stud o/c, deflection, lateral load & wallboard type/layers) we will be shown the corresponding product by ClarkDietrich that will be applicable for the choices made.

Item (2) shows the 3 choices available based on our design criteria. Selecting one of the heights listed at the far right is the next to last step.

Item (3) is the button to click which will create your wall type. It's a simple copy/paste once it's built out for you.

You will see something like the following once the wall has been built in Revit: 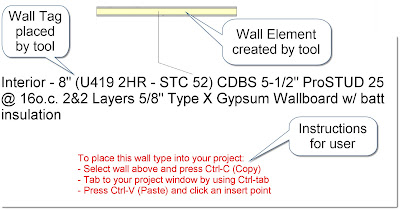 Where things really start to get interesting is the type properties. They are filled out so extensively and well it serves to address a number of things that an as built model in Revit would need to include. Creating walls in this manner is so fast it's not even funny! 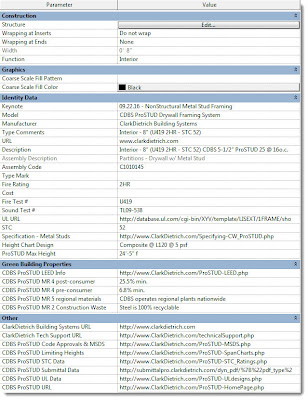 The only drawback I see to this, is you are now specifying manufacturer specific content. That's great if you are using ClarkDietrich studs on your project. Not so great if you aren't. I'm sure that's what they are hoping though, to get specified into a project via the use of this tool. Also, it won't create other types of walls such as CMU, Concrete, wood stud and other types. That being said, its making me want to give the API another look and see if I can't make my own, generic version of this tool that address all wall types. Then again, maybe this type of tool is something Autodesk should provide ootb for Revit!
Posted by Steve Bennett at 10:58 AM No comments:

Reflections on Testing and Setting up Revit Server